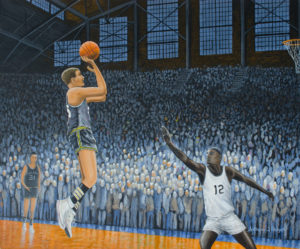 As a native of Belleville, Illinois, like most kids, I grew up as a fan of Cardinals baseball and continue to follow them to this day.  Years back I relocated to central Indiana where there is definitely a void of major league baseball.  In my adoptive State of Indiana however, Basketball is king!  If you ever had any doubts of that, this blog should convince you otherwise.  A few months back, I began a painting project to recreate the most historic shot in Indiana basketball history.

Doing a basketball painting….. in Indiana!

I think I am now officially…. 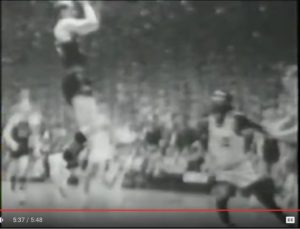 In 1954, Bobby Plump of Milan HS made a last second shot to beat Muncie Central in the Indiana State basketball tournament.  It was a “David vs. Goliath” moment.  The shot, the team, and Bobby Plump served as the inspiration behind the movie “Hoosiers.”  The interesting backstory is that as famous as that shot was, no picture captured Bobby Plump taking it.  Only some grainy 62 year old video of it remains.  On Sunday, in celebration of his 80th birthday, I was honored as Bobby Plump was presented my painting of him taking that shot.  The mystique of the that moment still captures the interest of Hoosiers which is why the Indianapolis Star featured a cover article of Bobby Plump finally getting his “picture” of that shot.  I have provided a 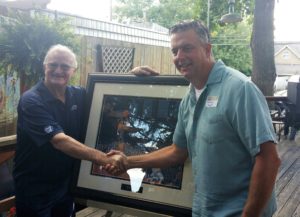 link at the end of this blog where you can read the Star’s feature and also see my interview discussing the painting.  The Indianapolis Star did a great job capturing the background and scope of the project, however I would like to share further insights with you regarding the research and challenges behind it.

First, all research video and photos from 1954 were in Black and White and many of poor resolution and detail.  In fact, the still shot from the video (shown above) is very grainy and blurry.  Secondly, the image cuts off all of the ball and even part of Bobby Plump’s head and fails to show the size of the crowd at the Butler Fieldhouse.  Especially challenging was the fact that there was no way to get any facial recognition of Plump from this image.  These challenges were tackled one at a time.

First, higher resolution B&W still photos were available from that game and provided many details about the uniforms, shoes, and socks that would make their way into the painting.  One interesting revelation from that era was that all the players wore two pair of socks likely to provide extra cushioning for their Converse All Stars.  Their team socks were put on first and then a second pair of white calf socks were worn and rolled down to just above the shoes.  Next I was able to gather details about the Milan uniforms with regards to how their team colors of black and gold were used.  I even discovered that their shorts included a belt which was commonplace for that era.  The defenders uniform details were also researched.  To fill in the gaps, Milan players and basketball archivists were interviewed to make sure that the color scheme was accurately depicted.[slideshow_deploy id=’716′]

Second, I discovered early on that the scene really needed more height which would show the size of the crowd and expansiveness of Hinkle Fieldhouse.  Hinkle Fieldhouse resides on the campus of Butler University and is a registered National Landmark.  Its iconic windows and rafters would add additional drama to the painting.  So off to the Butler campus I went with my camera in hand to photograph the Fieldhouse from the perspective of the video still shot.  I was able to get great photos of the upper reaches of the Fieldhouse and incorporate them into the scene.  While there, I had a young man on the Butler staff take some shots from the same floor location and also pose as the defender so that I could study how the uniform would lay and gather details on body positioning.

Third and most challenging was to capture Bobby Plump’s likeness in the painting.  Again, only black and white photos existed and most of them did not have Bobby’s face positioned in the proper orientation.  I poured over dozens of photos provided by those commissioning the project and had to work hard to capture Bobby’s profile and hairstyle.  His daughter was able to give valuable feedback as I went through this process.

Finally, other research was done to finish off the details.  I studied photographs of crowds, basketball, goals, and Converse shoes from the era.  You can see many of the research photos in the slide show provided.  To top it all off, I was able to record the last thirty seconds of that historic game onto a record-able button and provide it along with the painting.  It does a great job of capturing the excitement of that moment 62 years ago.  You can watch the video and hear the audio of Plumps last shot at the bottom of this blog.

I am pleased with how well received this painting is, and many have inquired about obtaining reprints.  We are hoping to partner with the Milan Museum and Bobby Plump in order to bring framed reprints with Bobby Plump’s and my signature.  Please contact me if you would like further information about obtaining this collectible reprint.

Click the image above to read the Indy Star feature and view the video interview.

In conclusion, I’m honored to have been able to play a part in re-creating this historic scene which holds so much importance to generations of basketball fans in the state of Indiana and beyond.  I look forward to future projects like this and welcome the challenges they bring.

That’s all for now.  Thanks for tuning in.

← It’s State Fair Time!
For the Holidays: Celebrate and honor veterans and servicemen →

4 Comments on “Officially a “Hoosier””